There is optimism for the new cherry campaign of O.P. Agritalia, which in Apulia, in the area of Bari, has 30 members producing cherries, for a total of 150 hectares. The season opened with a first, Early Lory, a cherry of bright color and excellent size produced under glass by the company Naturaviva of Bisceglie. “Thanks to the quality of this cherry and the advance also played on the Spanish product, prices are very good,” reveals O.P. president Michele Laporta.

The cherry campaign of Agritalia, the Producers’ Organization that in Apulia, in the countryside of Bari, has 30 members producing cherries, for a total of 150 hectares, has started with optimistic prospects.

“We started with a very early production at the company Naturaviva of the member Antonio Guglielmi, former president of Agritalia. – begins Michele Laporta, current guide of the P.O. as president and sales manager – We are in Bisceglie, in a plot of 3 hectares under greenhouse, which produces two weeks earlier than the normal harvest, which will begin in early May”.

The early cherry being harvested from mid-April is Early Lory
The early variety being harvested as early as the second week of April is Early Lory, a bright red cherry of excellent size, averaging 30 and above. “The product is fresh on the palate, with just the right amount of sweetness. – Laporta continues – The market is responding well. Thanks also to the advance on Spanish production, prices are rewarding the producer.

Quantities are naturally small, as this is a first-of-its-kind product produced in a single farm. The plant has an output of 300 to 500 kilos per day. Even the distribution channels are niche: “We are present – explains the president of Agritalia – in the horeca channel and with some specialist distributors of small fruits in wholesale markets”. 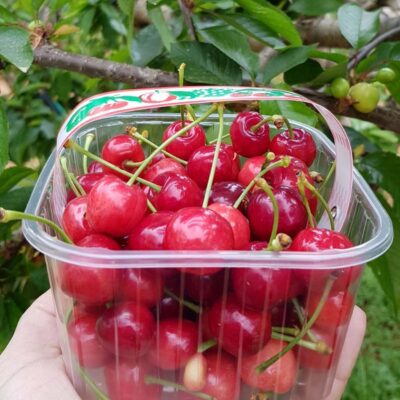 There is great expectation also for the start of the normal cherry campaign, which will open as anticipated the first week of May and will continue with all the main varieties of cherries duroni, from Celeste to Ferrovia. “Prospects are interesting, – concludes Laporta – The product is of good quality and will also have a fair size. Even on quantities we are optimistic: even if it is premature to make forecasts, we count on commercializing 2 thousand quintals of cherries”.